For the day before Valentine’s Day, I’m sharing the beginning part of a lunch date between Elena and Jess from my latest release titled We Three: One and One and One Makes Three.


“I haven’t dressed yet,” Jess said. “Just finished my shower when Hector called.”

Elena noticed that Jess’s hair was down, and mostly dry. It was an easy leap of logic that the blonde had spent her time using a hair dryer. It was also delightful to see Jess so at ease around her, walking around in almost nothing as she decided what to wear.

It was a torment, too. The handfuls of Jess’s breasts were currently unrestrained by a bra. The girl boxers only rested down an inch on her thighs, showing off hard-muscled legs that made Elena lick her lips. Jess turned to a small single stack of drawers and gave Elena a view to remember as she bent over to pull out clothes. Eric was right; Jess’s ass was amazing.

When Jess turned around, Elena noticed the clothing in the woman’s hands was the dashiki and deck shorts she had been loaned at the house. “I asked Maya to wash them, so they’re clean.”

Elena stepped forward and held out the dry-cleaning bag. “I had your suit cleaned.”

As they made the exchange, Elena realized she had a slight height advantage in her wedge sandals because Jess was barefoot. When Jess turned to put the suit in the closet, Elena asked, “What would you like to do for lunch?”

Elena saw Jess’s green eyes darken, the pupils wide. She bit her lip, anticipation quivering in her belly as she felt hope.

“I was hoping you’d like to do me for lunch,” Jess said. 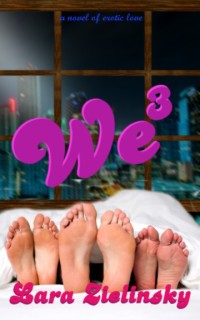 “That,” she breathed, “sounds perfect.” She stepped forward. Either unconsciously or not, Jess’s thighs parted around her leg, and her own knee pressed slightly against Jess’s heated center as the space between them disappeared.

Elena indulged herself in the taste and feel of Jess’s throat, lips moving there between pulling kisses from the blonde’s lips.

“I was really disappointed that I couldn’t finish our day properly yesterday,” Jess said while grasping Elena’s shoulders to hold herself upright.

“Eric is fond of the saying ‘good things come to those who wait,’” Elena said. She, however, was delighted to not be waiting for the blonde any longer, and apparently the feeling was mutual. Lean but soft hands grasped Elena’s thighs and massaged them before moving underneath and pushing up the hem of her summer dress.